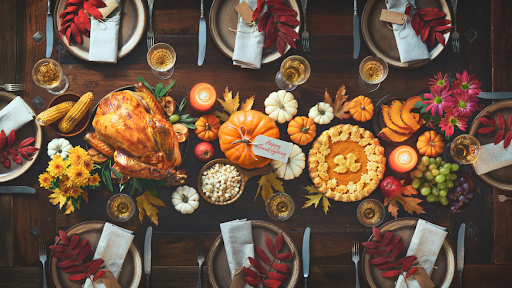 All the leaves have fallen off the trees, the sky gets dark at 5 p.m., temperatures are firmly dipping into the 40s, and we’ve reached that point in the semester where we can just about see the finish line. You know what that means: it’s almost Thanksgiving!

For most of us, this means that we get a much-needed break from school and travel home to our families. We also get a break from Saga food (no offense, Saga) and look forward to our Thanksgiving favorites. Sure, the turkey may get all the spotlight. But I’m here to talk about the real stars of the show, and what makes Thanksgiving a true meal: the sides.

I tried to compile a relatively comprehensive list of all the Thanksgiving side dishes I could think of. But, we all have different traditions and backgrounds, which makes it hard to make an objective ranking. Apologies if your favorite dish is not on the list! Below, I’ve ranked what I consider to be ten of the most common sides we love on Turkey Day.

Out of all the carbs that we allow ourselves to eat on Thanksgiving, I find dinner rolls to be the most useless. They’re boring, they’re tasteless, and they’re probably store-bought: dinner rolls are a waste of space.

Corn, as more of a summery vegetable, feels a bit out of place in a Thanksgiving spread. It’s a basic vegetable that, if we’re being honest, nobody really thinks of as a holiday favorite. Bonus points if it’s corn on the cob instead of canned corn.

All I can ever picture when somebody mentions cranberry sauce is the gelatinous red cylinder that slides out of an Ocean Spray can with ridges carved into it. I can understand how some people enjoy it, but this overly sweet side is the last thing I would put on my plate.

Mashed potatoes are widely regarded as many people’s favorite Thanksgiving side, but I disagree. I don’t quite understand the appeal. They’re super bland (unless maybe you supplement them with a little gravy) and after the first two or three bites, it feels like there is an insurmountable pile of tasteless mush on your dish.

Brussels sprouts, carrots, cauliflower, mushrooms, squash, or any other veggies your family may have on the menu are a much-needed break from the heavy carbs that we quickly fill up on. A nice medley of roasted vegetables gives off a very autumnal vibe that pairs perfectly with Thanksgiving.

Far superior to the bland and dry dinner roll is the subtly sweet and moist cornbread. A small smear of butter on a freshly warmed square is welcomed, but not at all necessary (unlike the roll, which is desperately calling for some iota of flavor). Enjoy it as is, or pair it with another side: cornbread is just as versatile as it is delicious.

A lot of people will discredit sweet potato casserole as a side by claiming that it’s basically a dessert. My answer to those people would be: what’s wrong with that? Who doesn’t love an excuse to have a sweet treat during the main course? Plus, nothing beats when the marshmallows have a slight golden-brown crisp from the oven.

This one might be a bit of a surprise, but I’ll fight for it. When done right, string bean casserole can be one of the highlights of Thanksgiving. If it’s soggy or cold, though, it’s completely ruined. Striking the perfect balance between the varying consistencies of the string beans, the cream of mushroom soup, and the crispy fried onion strips is the key. On paper, this dish can sound kind of gross, but somehow it works.

Part of what makes stuffing the best Thanksgiving side dish is that it’s really only eaten around the holidays. Absence makes the heart grow fonder, I guess. This savory blend of bread, crumbled sausage, and spices practically melt in your mouth. But the best part, by far, is when the top pieces get crispy and stick together. Plus, having a turkey on Thanksgiving without stuffing would feel criminal.