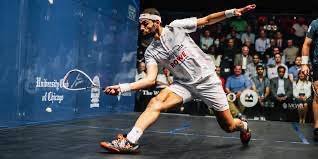 On October 8-15 Philadelphia, Pennsylvania, held the 2022 Squash US Open. Squash is a racquet sport that is played by two players, in a four-walled court, with a rubber ball. To make it easier to understand, think of it like tennis but the box version. This sport challenges your physical and mental agility as your quick decision-making skills come into play. Squash is not in the Olympics but is considered a professional sport, so they have world tournaments, just like tennis.

The Squash US Open is an 8-day excursion hosted by the Professional Squash Association, or PSA, which allows the top players in the world to compete for the number one spot. There is a men’s and women’s league for Squash. Each has such a diverse pool of players that it has been grabbing the public’s attention over the past few years.

Something interesting about this competition is that the prize money is the same for both men and women, and isn’t seen often in other world championships. The players play to try and win $185,500. For each match, it is best of five games going to a score of 11. The average game of professional women’s squash can last for 32 minutes, while a men’s game can last 43 minutes. There have been matches where it has lasted hours as well. These matches test the competitors’ mental and physical limits as they have to quickly decide their shot, move to the ball, then make that winning (or losing) shot.

As the tournament concluded, the top 3 women were all from Egypt. Number one was Nouran Gohar; placed at two was Nour El Shorbini; and third was Hania El Hammamy. The fourth spot was taken by an American woman, which was a great accomplishment for a sport that didn’t even originate in the states. On the men’s side of the tournament, number one went to Ali Farag from Egypt; second place was Paul Coll from New Zealand, and third was Mostafa Asal from Egypt. The most renowned squash player, Mohamed Elshorbagy, placed fifth overall.

Mohamed Elshorbagy has represented Egypt in the past but is currently representing England. He went pro at the age of 15 in 2006. Ever since then, he has placed as the world number one in 2014, 2018, 2020, and 2021. Not only is he incredibly talented and has a lot of skill, but he is the third youngest male player to have 500 wins under their belt by age 31. The most outstanding game of his career was against Rami Ashour in 2014; a link to watch will be below if you feel inclined to watch.

This might be a long shot as well, but if reading this article sparks your interest in the sport, Siena even has a club Squash team that you can join. The club meets Mondays-Thursdays, 6:30-8:30, right in the MAC weight room. It is a great experience and the team would love new members. You don’t need to have experience, most of the players don’t, and it is definitely worth looking into if you like to be active.

Link to the match between Elshorbagy and Ashour: https://www.youtube.com/watch?v=-xs8EUlCL5o&t=141s