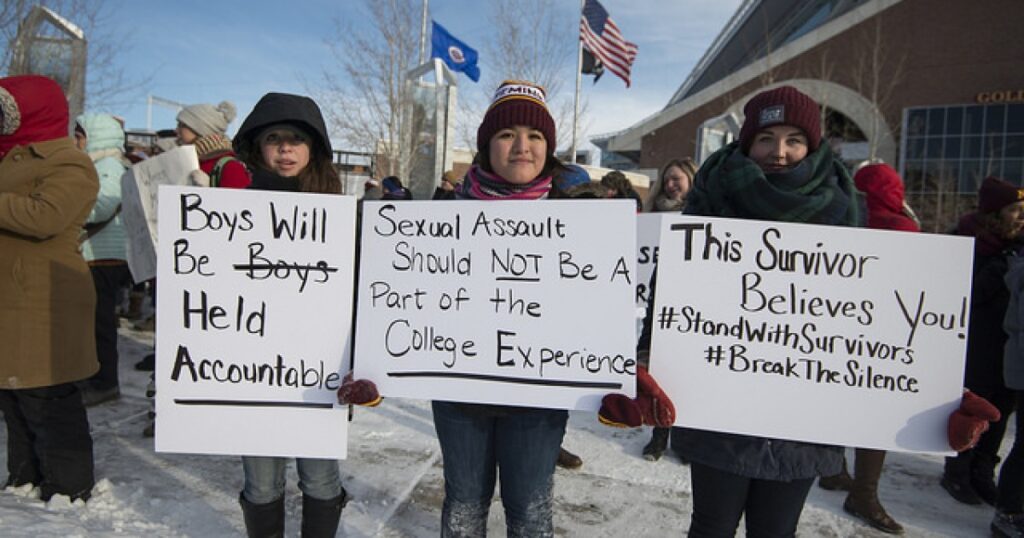 Campus statistics, study abroad opportunities, meal plan options and the types of food offered on campus, tuition estimates and extracurricular clubs/activities are all common things you will hear about on the campus tour of your dreams. As you walk around your (potentially) soon-to-be home, your aspirations about all of the opportunities that could be waiting at the tips of your fingers begin to grow. Your parents are amazed by the internship opportunities, the beaming educational advantages and are satisfied with the thought that their baby is going to be a part of a “safe” and “secure” environment.

You may be wondering why the words “safe” and “secure” are being placed in quotation marks. Let’s find out.

As a recently graduated high school senior, I was in that campus visitor’s shoes not that long ago. I vividly remember my first college tour at Siena College. The ice made it hard to walk from the Lonnstrom dining hall to Siena Hall without casually having to catch myself from falling before my tour guide noticed. However, I wore my boots for a reason that day: I wanted to see what my new home-away-from-home would look like—and what my life could be like had I decided to attend.

I didn’t know what the “red zone” was until the last few days of my freshman orientation experience. I soon concluded that sexual assault statistics weren’t one of the many things mentioned on your college tours nor were they something that you could easily discover on a college informational website. What’s even worse than the lack of information about sexual assault given to future students on their tours? The lack of action taken by the college itself when these incidences occur. I have been at Siena College for a little over a month now, and have already caught wind of three reported sexual assaults (one of which happened on the same day as our required sexual violence prevention training). What has the college done to make us feel “safe” and “secure” you may ask? Well, I am pondering the same question.

The “red zone” is essentially Siena College’s (and any college’s, for that matter) way of saying “hey students, so we typically notice a plethora of sexual assaults during this time. Protect yourselves!” Before coming here, it was my understanding that they would be the ones protecting me. This campus is known for its advanced safety precautions, right?

While it may appear that I am solely writing this article to bash my college campus, this is not the case. Rather, I am writing this to make these issues more widely known—it just so happens my campus is a factor in this scenario.

It is a widely known fact that 97 percent of women in the United States alone have experienced some form of sexual assault; this is insane and not okay. Studies show that, of the 97 percent, around 19-27 percent of those women experienced sexual assault on their college campus. Although women hold the majority when it comes to experiencing sexual assault, men can be victims to it as well (around 3 percent or 1 in 6 men). There are numerous courses of action that we as a society can take to help put an end to sexual assault. However, with this information in mind, I pose a single suggestion that I deem as one of the, if not the, most important: stop victim-blaming.

For the Sexual Assault Awareness movement to further progress and move forward, society must stop placing the blame on the victim and start placing the blame on the perpetrator. Victim blaming is one of the most damaging factors in any case of sexual assault (in both women and men) that prevent the victim—I prefer the term survivor—from sharing their stories and seeking the proper help they need and, most importantly, deserve. A survivor’s clothing choice, physical appearance, age, relationship with the said perpetrator, gender and the all too common phrase “you were asking for it” are all forms of victim-blaming that need to be abolished.

Which culture/society do you want to live in? Personally, I want to live in a society where students shouldn’t have to resort to believing that using the blue lights on campus is their only form of help, where young women don’t have to keep a key in-between their fingers or mace in their purse when walking home from their 6-9 class at night and where young men feel as though their experiences with sexual assault and rape are just as valid as anybody else’s. We as a society need to enforce change, and we cannot do that unless we implement change within ourselves first.

With all of this being said, I bring my focal point back to the main essence of this article: sexual assault should not be a normal part of the college experience. Educate yourself on the serious mental, physical, and emotional tolls that sexual assault can have on an individual, discover new ways to be an active bystander rather than a passive bystander, and hold your college campus accountable.

A young woman in the 97 percent