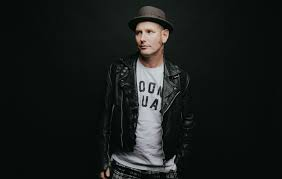 The issue when singers in major bands launch solo careers is that they can almost never truly step out of the shell of the band. Case in point Steve Perry from Journey, Freddie Mercury from Queen, and Paul Westerburg of The Replacements all had failed solo careers except for a minor hit or two. Yet lead singers still decide to do their own thing and Slipknot and Stone Sour frontman Corey Taylor is the latest to do so. After launching singles “CMFT Must be Stopped” which featured rap rock theatrics and ‘Black Eyes Blue” rooted in country or southern rock, the release of the debut solo album was anticipated for both good and bad reasons given the singer’s metal background. This album titled CMFT is a wild ride from start to finish and takes its name from the influences Taylor has acquired over the years and put into the music.

First and foremost the album is rooted in hard rock but takes a hint of inspiration from country and ‘80s rock bands like AC/DC, Poison, and Motley Crue to name but a few. Album opener “HWY 666” borrows influence from the late Charlie Daniels hit single “The Devil Went Down to Georgia” in terms of sonics and even the story about how the devil let the singer down in life: “All I know is only death provides, life is just the writing on the wall, all I know is I can see the end, this is where we part my friend” Corey sings in the chorus.

“Samantha’s Gone” opens with a guitar riff that is ear candy for the slightest rocker in all of us. Chronicling feelings after a break-up, Corey provides a song that’s therapeuticlly looking ahead because “I’ve got nothing to lose because Samantha’s gone”. Although the guitar and drums are in your face, you’ll definitely want to heart the song on your Spotify playlist because you’ll be playing it again in no time.

Nowhere is the influence of AC/DC greater than on “Halfway Down”. The guitar is heavy, the drums are a bit bombastic, and the vocals are upfront in the mix. It sounds very reminiscent of the early Bon Scott era of that band’s history. This song is pure rock and listeners can hear how Taylor is energetic and wants to be with the person whom he is singing about.

One of the qualities Taylor is most known for is his open and honest songwriting; elements that have made his bands Slipknot and Stone Sour so popular among fans. On “The Maria Fire” he sings vulnerably about his feelings of a failed marriage. “The longer I’m away from you, the more I can wait, just to dance in your ashes and spit on your grave, the moral of the story is don’t be surprised when you’re burning on the other side”. The singer either penned or co-penned the tracks on the album and this song in particular was a solo write.

Soft rock also does find it’s way in tracks “Silverfish” and “Home”. A majority of this album is in your face (or ears possibly), but these two songs take a step back and remind listeners that sometimes the greater gift of music isn’t the theatrics but just the message and a singer revealing a part of themself to the world. The former does build up the tempo and production but the majority of it stays contained until it explodes whereas the latter is purely piano and strings with Taylor’s vocals. On this track is where he allows his voice to shine in similar veins of  “Snuff” from Slipknot.

The most divisive track on the album is “CMFT Must Be Stopped (Featuring Kid Bookie and Tech N9ne)” because it is unlike anything Taylor has done before. Not to compare the song to Slipknot, but the band’s early days featured rap heavy verses such as “Spit It Out”, “People=S**t”, and “Wait and Bleed”. Therefore, Corey can rap and fast but it was very mumbled most of the time, but on the new song listeners can hear him pronounce every word clearly. So he worked really hard to get to that skill level. Bringing in an infectious rock groove with anthemic chants and help from professional rappers make this song a party track but one that rock and roll or hard rock purists may want to skip over. It’s not a bad song but if you don’t like it within a quarter of Taylor’s verse, hit the skip button because it’s going to be a long five minutes for you.

CMFT, the album, is undeniablly pure “Corey Mother F**king Taylor” as he calls himself. This record is every bit of Taylor uncensored due to his other band members also contributing to projects such as Stone Sour’s Come What(ever) May and Hydrograd or Slipknot’s Iowa and We Are Not Your Kind. There’s a sense that Corey is having the opportunity to release the album he has always wanted to make. A bit of a throwback hard rock party. As much as the singer will take for seeming to have deviated from his work as part of the above bands, the reality is that the singer never deviated but compromised in favor of the band. The result of that compromise left listeners with these thirteen tracks that would have otherwise never seen the light of day. To that end, we now know that “CMFT can’t be stopped!”.

Colin gives this album 8 out of 10 Saints.