A Day in the Life of Siena Tennis 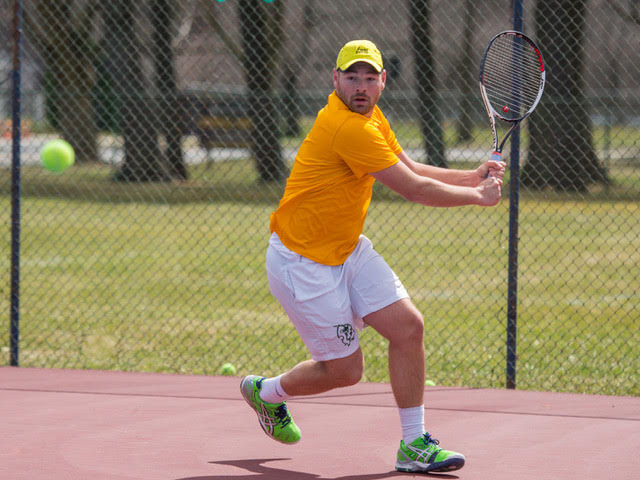 For Cameron Kirkwood, tennis has been a high priority all his life. While most high school students in the country go from class to class for seven hours a day, Cameron’s high school experience was very different. Before playing for the Saints, during high school, Cameron took online classes for four years so he could travel around the country to compete for tennis. Since tennis requires warm weather most of the time, his home in South Carolina provided an exceptional location for playing the sport all year round, causing him to sacrifice a regular high school education to improve his skill.

Now at Siena College, Cameron is going from class to class every day, but tennis is still a priority in his life. A psychology major with a career path of dental school, his workload can get a bit overwhelming at times. Also, an added factor being that the Siena tennis team does not actually practice at Siena. Monday through Friday, Cameron and the rest of the tennis team drive over to Tri-City or HVCC, where they practice and compete on the courts at the facility. Unlike a majority of Siena athletes who can slump out of bed in the morning 20 minutes before morning practice, Cameron gets up even earlier to drive over to their practice areas.

After a two-hour tennis practice in the morning, Cameron’s schedule includes several science intensive courses. From organic chemistry to physics, research methods and several labs, it is enough for any regular student to feel busy. However, Cameron cannot just go to the library right after class. Two times a week, the tennis team lifts for an hour, which is also time-consuming for Cameron. He says at times his workload can get a bit extreme, but “it is worth it to represent a school that I love and cherish.”

Competitions for Cameron and the tennis team often take them away from Siena and classes for several days at a time. With only three home matches for the 2018-2019 tennis season, the team will travel to places like Ohio, New Jersey and Pennsylvania. To avoid getting behind while on away matches, it is not uncommon to find Cameron on the bus doing homework and reading textbook chapters from classes he is missing. All of these away matches do not only take time away from his classes, but also his social life. But Cameron states that tennis is more than a sport to him, he says, “It teaches me and my team to be disciplined on the court and off in the classroom, studying, and in lift.”

Not only being a team member, but also a captain, Cameron has to set an example for his other team members only in his junior year at Siena. He tries to keep the team as focused as possible, while not being consumed by classes during practice times. More than half of the week, Cameron has to regularly pull 14-hour days, from class to practice to lab, the day is non-stop until he can go back to his room and relax.

Both in school and on the tennis court, Cameron sets goals. He says that tennis is the type of individualized sport where you cannot just be average, you have to work every day to be the best you can. He brings this mentality over into his schooling – and the rest of his life.